Is Ambition a Dirty Word? - WeQual
Skip to content 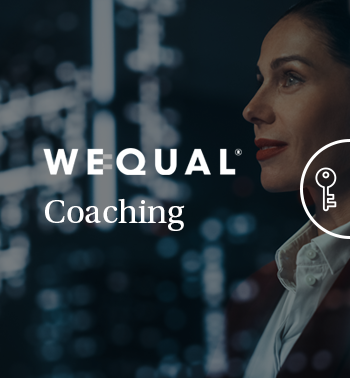 Coaching
Back to news

The VP of a large UK listed company lowered her eyes and whispered, “I want to be the CEO of this company”. It was as if just speaking her ambition out loud was wrong.

One of the things I’ve learned from working with ambitious women, is that the very word ‘ambitious’ can cause a negative reaction. Why? Because so many within our culture believe that a woman should NOT be ambitious. It’s perceived as too … masculine.

It’s a good example of the double standards we expect from women. The evidence shows the path to the top is harder for a woman than a man. As Angela Qu (former Chief Procurement Officer at Lufthansa) said at our recent Think Tank on Gender Equality, “Men are promoted on potential, women on achievements”.

As men and women, we need to celebrate and champion ambition regardless of gender. Leadership teams which are more diverse do better on every score that matters. They become better places to work, stronger financially, and, critically, more concerned with the wider environment, social and governance (ESG) issues. With everything happening in the world right now – surely we need more of that?

“The people who are crazy enough to think they can change the world are the ones who do.”  Steve Jobs.

As for the VP I mentioned above? I applauded her, as I do every woman who tells me they want to be CEO. Within most of our cultures – it takes courage to not only want it, but to verbalise it.

If you are already a member, we invite you to join us for our next executive coaching event, Shifting Your Mindset for Ambitious Results, taking place on 30 November. At this event we ask you to stop thinking about what society wants from you and to stop apologising for being ambitious. This is a time to focus on what it is that you want and what difference you want to make.

If you are an ambitious woman leader then join us today. WeQual Global is a private, global network for women executive leaders to connect, share best practice, and learn from one another. Find out more here.

Have you been judged harshly for being ambitious? Maybe you’ve had great sponsors who have supported your ambition? Maybe you disagree with the male/female perspective. Leave your comments below.