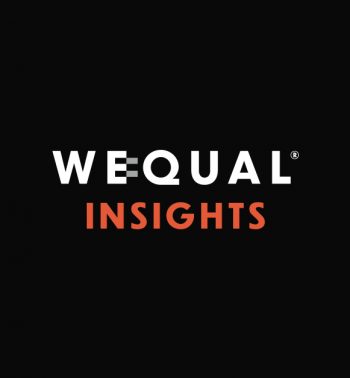 Insights
Back to news

Diversity has to include a seat at the top table

What I have learned about DEI from the WeQual process, by CEO and Founder, Katie Litchfield

Companies that are serious about diversity, equality, and inclusion, need to keep their DEI Chief out of the HR department. Because, if you believe in the importance of DEI, then your diversity and inclusion lead has to have a seat on the executive committee automatically. And report directly to the CEO, too.

Having a face at the top table is not just a token visible effort either, it is a vital part of humanising the equality of your company. Having someone who can talk directly to the executive committee about real stories and real people – real women – is better than any target reached in a report. After all, there is no point having targets if no one is listening to women and they are leaving.

Over the last two and a half years, as founder of WeQual, I have spoken to hundreds of senior women, conducted detailed interviews with 120 WeQual finalists from companies all over the world, and spoken to hundreds of CEOs and their HR, and Diversity and Inclusion, leaders. Having access to such an experienced knowledge bank has led me to conclude that change has to come from the top. Women (as does everyone) know when they are not taken seriously, or when their leaders are only playing lip service to gender parity on the executive committee. Companies should be under no illusion: their women know when they are being hoodwinked. And they will walk.

Actions always speak louder than words, so I despair when I hear of companies that are so fearful of their women leaving that they even bar them from entering awards – like the WeQual Awards – because they worry about them getting poached. They must think that if they can keep these women secret then they will retain them.

If only companies would think positively. Just imagine the reaction to a policy of sitting women (and other members of your staff) down and together worked out a career progression within your company? Or even put together policies that encouraged a healthy work/life balance? Only good could come from both policies.

Don’t get me wrong, women are not after any special treatment. But women are more likely to be affected by work breaks, or childcare, or even having to look after an elderly relative, than their male counterparts. Supporting them can go a long way to retaining your top talent.

Women only want human understanding – especially when they are going through temporary life-changing experiences. A company needs to understand that circumstances which force people to take extended – or indefinite – leave are not permanent. Being sensible, and giving women the time they need, is invaluable.

I have found that there are three crucial ways in which the most successful companies have managed to keep a high level of retention among their talented women:

Women are getting tired of being put into a box by everyone involved in their advancement. Unless these issues are addressed in all major companies, we are likely to see a continuation of the record number of women who have left top roles in the last year: either to work for themselves. Or they are leaving the business sphere altogether.

As one woman, at the end of her tether after trying to progress for years, told me the other week: “It’s not a glass ceiling, it’s more like a sticky door. Which means that, because it is sticky, it is hard to push. But if someone is pulling with you on the other side it makes a world of difference.

“But when that door shuts it sticks again, which makes it harder to push open again. There very rarely appears to be someone on the other side of the door these days,” she added.

Companies are trying hard to fix this, which is to be applauded. And it is so pleasing to report too that I am speaking to more and more talented women who are emerging thanks to the WeQual process.

After regulation: Finding balance in...

The Buck Stops With Ceos...

Forget quotas and so-called "realistic" targets for gender diversity at...