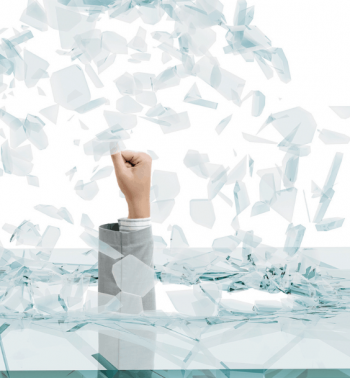 A 13-year veteran of ABB at this point, Heather has recently managed some high profile OGC projects and is ready for a new challenge. She accepts the new role and dives in.

Meanwhile, in London, the Financial Times’ (FT) Katie Litchfield has had it. After years of working with top executives of the UK’s largest firms, she’s heard the same excuse too many times for the lack of women leaders: ‘If we could find the talent, we’d hire them.’

She quits her job to start a new venture focused on elevating women into senior positions by providing executive coaching and profiling alongside carefully curated talent accelerator programs, speaker bureaus and awards.

Cut to 2020 and Katie’s company, WeQual, has created a 200-strong network of outstanding female executives ready for C-suite leadership. In 2021, Heather wins a WeQual award in the Leadership category for the Americas.

The paths that these women took to reach this moment are different, but both arrived at a similar place. Each saw that there was a steep drop-off in the percentage of women in executive committee roles, even compared to just one level down in the organization. But rather than curse the male-dominated darkness, they each decided to take action that has since become a defining element in their careers and their lives.

I first met Heather in 2010 at the Houston Marathon, which ABB was sponsoring. I had just handed off one of our senior managers to a media interview when I walked into the ABB hospitality tent and met one of the account managers in the O&G business. Heather’s direct manner and welcoming personality made a longstanding impression and likely helped her subsequent rise in the organization.

Following that first encounter, I had one or two opportunities to work with Heather on case studies with O&G customers, but that was it. As is often the case in large firms, you just don’t run into people if your roles don’t bring you together. Still, it came as no surprise to me when I learned that she’d been recognized with a WeQual award.

When I meet Katie Litchfield for the first time, she too makes a strong first impression. She starts our Teams call by asking me if I am going to turn on my camera, as she had done with hers. She says it in that particularly British way, implying no offense. Her warm, no-nonsense approach makes me want to turn my camera on.

Katie tells me she worked at the FT for more than 20 years, most recently organizing executive forums that brought her in regular contact with the elite of British industry. It was rewarding work, but the gender equity issue kept coming up.

“I reached a point where I just couldn’t hear one more CEO tell me there were no women to hire for executive committee positions,” she recalls. “I decided then and there to do something that would make it impossible for anyone to use that excuse again.”

“I was asked to create a global sales team, recruiting from country, division and business unit teams. Working with a group of three, I scoped the opportunity in full and defined profiles for each sales leader,” she explains.

Heather believes in the value of a diverse team, but building one from scratch came with some risks, like hiring a 30-year-old female with no engineering qualifications to lead the effort in China. After closing three big orders and positioning ABB for “one belt one road” projects, it was clear that Heather had made the right pick.

“With the new team in place, we developed a playbook detailing our offering and key opportunities,” Heather recalls. “We went customer by customer, in oil and gas where our efforts had been to date, but also in new sectors like food and beverage, water, and data centers. I think we’ve had a strong impact commercially and culturally.”

That’s one way to put it. In fact, Heather’s 24-person team racked up some truly remarkable results:

That’s an 82 percent rise in sales for those of you keeping score at home. For every dollar of cost, the team generated more than $42 in revenue. Not surprisingly, Heather has been asked to share the success factors behind such an effective group. She emphasizes diversity, but also has some simple advice.

“I tried to stay open to opinion from the team, customers, advisers and other stakeholders,” she says. “And if you’ve chosen your team well and you look after them, they’ll deliver – especially when we remind and encourage each other to focus on our long-term goal.”

“If you’ve chosen your team well and you look after them, they’ll deliver.”

In 2020, the Covid-19 pandemic put that philosophy to the test, disrupting workflows and introducing enormous health and safety challenges. Heather’s team faced a 20 percent cost reduction mandate while a Group-wide restructuring consumed up to a quarter of her time. She also faced a very specific challenge just as the pandemic was taking hold.

In January 2020, McDermott International filed for bankruptcy. The firm was an important customer, accounting for 15 percent of the team’s annual revenue. Heather believed they could come through the situation and suggested ABB continue working on nine projects, each representing $2b to $8b in capex, without being paid.

“We established a direct connection between the ABB and McDermott CFOs,” Heather explains, “and by adapting hardline rules, we helped our engineers give their best.”

By July, McDermott was out of Chapter 11, and by year end ABB had received all of the $30m McDermott owed on the various projects. ABB’s relationship with them is now stronger than ever.

McDermott CEO David Dickson said at the time, “Heather is like a dog that will not drop her bone and she does it with grace.”

She displays that same grace in explaining her reasoning.

“As a leader, I believe my team includes not just our salespeople and their families, but our customers and their families too. I find that a family ethos – nurturing long-term relationships, avoiding hardline rules, focusing on curiosity and kindness – is as effective in business as it is with children.”

Women have made tremendous gains in corporate management since the days of typing pools. However, as Katie observed again and again, there was one glass ceiling that remained stubbornly in place: the one just below the C-suite.

She tells me about a 2018 report published by Hampton-Alexander Review. It showed in the firms making up the FTSE 100, only 27 percent of executive committee (EC) positions and their direct reports were filled by women. The FTSE 250 fared even worse, coming in at 24.9 percent.

Katie formed WeQual to address this disparity by focusing on the cohort of female executives poised for EC positions or jobs reporting to an EC member. The company offers training for female execs and organizations, and operates a speaker’s bureau, but WeQual is perhaps best known for their awards, which launched in London in 2019 and expanded to New York in 2020.

Key to the awards’ success was winning support from an exceptional range of talented executives. Katie leveraged her contacts and as a result the jury list for WeQual awards reads like a who’s who of global business: judges include CEOs from S&P Global, Kellogg’s, CocaCola HBC, JP Morgan, Rolls Royce, Verizon and more.

Despite being just three years old, the WeQual community has become a powerful engine for change and the awards are now global.

Critically, WeQual is also a community.

“Award winners become part of a tribe,” Katie explains, and they are expected to become mentors to other women. They keep in touch. They share successes and failures and draw on each other for support.

“Recognizing that there’s a pipeline of women leaders ready for the C-suite shows us that change is possible and can benefit all of us, Heather adds. She also points out that elevating qualified women need not come at the expense of men.

“This is not a zero-sum game,” she says. “More women leaders means more opportunities for men to define success beyond work. I know so many male leaders who’d like to make more time for their family or other interests, but the dominant culture is not supportive.”

For Katie, her focus remains locked on the road ahead and moving the needle on women’s participation at the highest levels of management.

“The right women are out there,” she says, “and we’re making sure everyone knows it.”

“The right women are out there, and we’re making sure everyone knows it.”

Heather, meanwhile, continues to put diversity at the forefront of her job while building her personal skill set.

“Currently, I need additional P&L experience,” she says. “I’m working closely with global product groups and local business units to get that along with mentoring from other senior leaders.”

She is also being coached on investor relations.

Speaking to these remarkable people, it’s hard not to come away inspired. Both Heather and Katie clearly believe in themselves and in what they’re doing, but it’s their determination to take control of their circumstances, to DO something, that sets them apart.

I’m sure each has endured many episodes of sexist or inappropriate behavior over the course of their career but neither said anything about that in the time I spent with them. It wasn’t relevant to where they are going. They weren’t going to let it hold them back, and they certainly didn’t need anyone’s pity.

Women still have a long way to go, of course. There is still a substantial gender pay gap across all sectors, and women—especially those in lower-skill positions—continue to face harassment on the job. But  there is now a business case for diversity and inclusion. As McKinsey’s 2019 report, Diversity Wins, points out, businesses with more women leaders are 25% more likely to outperform their competitors.

More females in leadership roles can only be a good thing, and if women like Katie and Heather can realize their goals, we’ll all be better off for it.

Today we publish the second in our CEOs Uncut podcast...