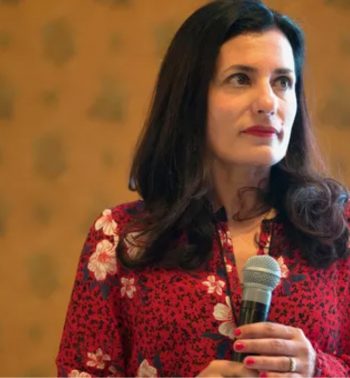 This article is a translation of an interview by Valeria Arnaldi with Isabella Panizza. The article first appeared in the Italian national newspaper, Il Messaggero, on Tuesday January 12 2021. [You can view the original article here].

Culture, commitment, constancy. These are the principles on which Isabella Panizza has based her career. Born in Rome in 1973, the Head of Global Digital Media at Enel, the Italian energy giant, was the only Italian finalist at the recent WeQual Awards, an award that aims to promote diversity and gender equality in the collective executive committees of the largest companies in the EMEA region (Europe, Middle East, Africa).

How did you start out in the world of communication?

I started writing in 1993. In 2004, I moved to London where I was a correspondent for Condé Nast. There were no bloggers and influencers yet, nor social media. Being in London meant having first-hand access to news about things that came to us in Italy as much as two or three years later. In 2008, I became editor-in-chief of the Italian online edition of Wired Magazine.

From journalism you moved on to corporate communications. Is the narrative approach of journalism effective in a corporate setting?

This is the winning approach for a large Group that does not want to talk about itself in a self-referential way, but that decides to do so by trying to anticipate the needs of its main stakeholders, inspiring them. In 2012, I joined Yoox Net-a-Porter, a global leader in luxury e-commerce, dealing with brand communication on its editorial channels. It was an experience of transition from journalism to corporate storytelling that taught me how similar the challenges are. If you are writing for Wired or for a multinational brand: in both cases you have to be able to engage the audience. I joined Enel in 2015. With my team, I had the privilege of giving a digital home to the new brand by managing digital communication at a global level, the websites and social media channels of the Enel Group.

The advent of digital has completely changed the way companies conceive time. Everything has accelerated. Furthermore, social media obliges them to communicate by constantly producing content. Think of Instagram Stories, which disappear after 24 hours. Digital communication allows you to have the data to understand what people like. But there are so many that you need to understand which ones are really important to eliminate the “noise” of others. Everything has to be dynamic, fresh, interactive. Many visuals are used: you have to give experiences.

And how do you do this?

The creativity. We are bombarded with information, advertisements, stories. If an idea isn’t creative, it won’t leave its mark. Not surprisingly today, multinationals show their values before saying how they are organized, which used to be in the foreground.

Did you encounter any difficulties in your career as a woman?

The biggest obstacle was getting out of the comfort zone. In 2004, I decided to leave Rome, and a permanent post as a journalist in a local publishing house, to go to London. At 33, I decided to go back to studying because the world had changed and so did the rules of communication and marketing. This is why, in 2006, I took a Masters Degree in what is now known as Design Thinking, at Central Saint Martins in London. There too I was the only Italian, like today in the WeQual member list. The difficulties I have encountered in my career are those that a woman encounters in a historically male world. This is a situation that is normalizing thanks to the increase of women who undertake careers once considered only male, from management to sport. As a mother, the difficulties are also linked to trying to make the dual role of manager and mother work better. My three children are called Franco, Costanza and Victoria because if you are a frank and fair man with people, and you have perseverance never giving up, then you will succeed. These are our family values ​​and they are the same ones that I also apply every day at work and with my team. Obviously this is the storytelling I created (in the true sense of the word!) that I care most about!

There is still a long way to go, but I see the light at the end of the tunnel. We need to have a positive attitude and ask ourselves every day what we can do to proactively create value in our organization without feeling discriminated against or disadvantaged. And companies must also do their part, building contexts that reject prejudice, creating equal opportunities and working on women’s empowerment. There are many initiatives in Enel that are helping women to grow and making the company more inclusive. Moreover, even in the world things are changing rapidly. Who would have thought that a female and black Vice-President would arrive at the White House, yet Kamala Harris has exceeded our dreams.

Is there a poor culture of female leadership in our country?

Unfortunately, yes. But after some uphill struggles, thanks to prizes like WeQual, there are some better times ahead. In general, one must believe in human capital. And it is essential to network and encourage the inclusion and growth of women in professions where their presence is still small. In this, the support of all women who have managed to achieve excellence in these professions is fundamental.